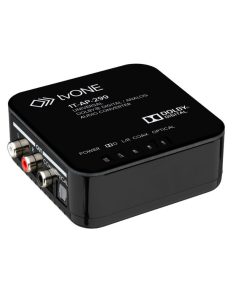 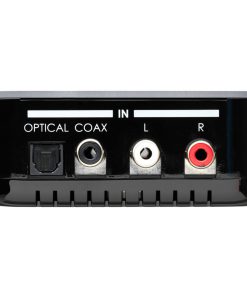 This easy to use, compact, plug and play signal converter for either digital into analog or analog into digital uses Dolby® Digital decoding sampling frequencies between 32 and 96 KHz, allowing for optimal conversion rates for most recordings.

CORIOgrapher, the control software for the CORIOmaster family of processors, is a simple, easy to use design interface that enables window and source positioning and transition effects. This dynamic feature is easily managed through presets in CORIOgrapher or by simple commands executed by third party control systems. 50 presets can be saved permanently in the system.

Quad HDMI Input Module: Double the number of system inputs for up to 56 sources on a single 4RU CORIOmaster chassis (CM-HDMI-4IN).

Dual 4K Output Module: The 4K60 output module (CM-HDMI-4K-SC-2OUT) provides a smoother, more immersive, video experience. Output choices using the new module include 4K60 (up to 14 outputs), 4K30 (up to 28 outputs) and 4K60 output cloning, or for dual, independent, 4K30 outputs. The cloning feature makes setting up repeat displays, duplicated side screens and screen recording much simpler and more efficient in use.

CORIOgrapher Enhancements: The CORIOgrapher setup and control software has been updated. Presets can now be specifically numbered, which makes programming any member of the CORIOmaster
family even easier and quicker, while removing automation set-up headaches.Enhanced preset management saves time by automatically including newly added windows to existing presets and a cleaner look and feel for simpler creation of display layouts and for selecting sources during set up.

Keying: Uses optional keying dual output module (CM-HDMI-SC-2OUT-KEY) to provide keying using two layers, background, and foreground. The module uses a luminance keyer so any video information in the foreground layer that is darker than the defined luminance key level will be keyed out allowing the background layer below it to become visible. There is also a softness factor so that edges appear anti-aliased. Keying is done in real time with no visible latency.

8HD Player: Uses a 4K streaming media and playback module (CM-AVIP-IN-1USB-1ETH) to deliver synchronised playback of up to 8x 1080P/30 stored files. Create and store fully synchronised video groups and deliver to up to eight outputs. For example, a single source can be split into 8 multiple files to create an 8 x 1 synchronised layout. Other layouts are possible depending upon how your displays are arranged and how your source files are created. Files are grouped for synchronised playback and multiple file groups can be added to a playlist for presentation.

Low Latency Streams: Use the 4K streaming media and playback module (CM-AVIP-IN-1USB-1ETH) to view an incoming, low latency, IP stream from a live source. Simply enable low latency mode for a typical latency below 300ms from source to encoder to the CORIOmaster. Audio is not supported in low latency mode.

EDID Manager: Manage system default EDID’s and upload new EDID’s as .edd files and assign these to your inputs as required. User added EDID files can be deleted if no longer needed.

FTP Upload: Connect your 4K streaming media and playback module to an FTP server to enable media files to be received over the network and stored for playback. New files uploaded to the server can be synchronized to the module by using a simple API command. Files that are part of a playlist can be updated to the server by uploading them to a sync folder, synchronized with the module using the API command and played automatically by the module when next due to play in a playlist. Download speed to the module is managed so as not to overwhelm your network.

CORIOmaster App: The CORIOmaster app is a free and secure application for smartphones and tablets that extends the control of CORIOmaster video walls onto mobile platforms. Users can execute all simple control functions with ease through the CORIOmaster app, including viewing all canvases, viewing ‘source to window’ assignments, activating presets, switching inputs, and assigning fresh sources to windows. More sophisticated control is possible by sending single or command chains using API commands set.

Secure Communication mode: Optional mode to encrypt all networked based communication through AES128 encryption to provide private communication in mission critical applications where network security and authentication is essential.

REST API / WebSocket: Based on industry standard schema, CORIOmaster supports REST API providing multi-user communication to device. Integrators can now subscribe to a growing range of events to provide real time feedback from CORIOmaster (such as: HDMI handshake, lost source, USB stick removed, etc). These events can be used by a control system to automatically monitor the performance and events of the videowall and respond accordingly.

Multiple control points: Using our REST API up to four users can now control a single CORIOmaster chassis simultaneously making programming, control and fault finding a dream. In addition to control via CORIOgrapher, simultaneous control is possible using the CORIOmaster app (IOS and Android) and by a third-party control system using our real-time API interface.

Audio management: Audio can be passed through the system from source to display. Alternatively, audio can be de-embedded, cross converted and re-embedded on another source for each of your four canvasses. Input and output volume control together with audio mute gives full control.

CORIOmaster App: The CORIOmaster App is a free application for smartphones and tablets that extends the control of CORIOmaster video walls onto mobile platforms. Download it here.

CORIOmaster Transitions: Building of presets in the system now save one or any combination of the following window transition effects as part of a single preset: